Collecting the Electricity Bill is a Nightmare for Many

For many consumers the price of electricity across the National Electricity Market (NEM) is already at crisis point and Friday’s COAG Energy Ministers meeting must address the issues causing out of control electricity prices.

NIC CEO, Tom Chesson said people across the NEM were now genuinely fearful of and stressed out by their electricity bills.

“To put it simply electricity prices are too high and must be cut by 30% immediately for all consumers across the NEM.”

“Recent blowouts in electricity prices in South Australia and the mistakes leading to massive price hikes for Essential Energy customers in NSW are just the tip of the iceberg.

“The Essential Energy fiasco is going to impact over 1000 business across regional NSW. (see 2 slides below)

Mr Chesson said NIC had spent the last five years involved in the fight against high prices, writing of numerous submissions, participating in countless hours of ‘consultations’, Energy Green and White Papers, Senate Inquiries, appeared at the Australian Consumer Tribunal in NSW and SA. The conclusion we have reached is that the current system is fundamentally flawed, it is broken and it is getting worse.

“It is not just NIC who has raised issues about the regulatory framework, in 2014 the ACCC Chair, Rod Simms said;

“The Prime Minister is spot on: we need to be agile and innovative if we are to be globally competitive and not a country whose best years are behind it.

“In order to be agile and innovative we need affordable, reliable energy. What we have now is a broken regulatory framework devised by COAG in which we are paying electricity prices way higher than they should be.”

“With the push to ‘de – carbonise’ our economy we have a once in a lifetime opportunity to again make energy prices in Australia amongst the cheapest in the world. Consumers paying the cheapest price for electricity in the OECD should be the Government’s overarching goal.

“Governments must focus their collective efforts on deploying strategies in the transition to renewables to mitigate the cost impacts which are leaving consumers and business stranded, especially when current technologies are not sufficient to support peak demand in a reliable way.

“However, the fault doesn’t just lie at the door of renewable energy. Public and private network companies which account for the majority of an irrigators electricity bill have also worked out how to game the system.

Mr Chesson said an immediate cut of 30%in electricity (based on 2014/15 prices) was achievable through:

Mr Chesson said we need a suite of food and fibre tariff for the irrigated agriculture sector to be globally competitive.

“Coupled with a suite of food and fibre tariffs COAG must engage oursmartest and most innovative tech savvy people and use their skills to design a generation system for the NEM which can produce and sell electricity for no more than 8 cents a kilowatt 24/7 with no differentiation for peak, shoulder or off – peak.

“As a direct result of the economic vandalism of successive governments and the gaming of the rules by the network owners, many NIC members are seriously investigating going off grid and transitioning to renewable energy.

“A reallocation of existing ARENA funding to support a $250 million water and energy productivity program is urgently needed to fund and accelerate adoption of energy solutions in irrigation that enable smart, water efficient irrigation practices .

“Mr Chesson concluded by saying something is seriously wrong when small scale diesel generation is a better option for irrigators than using a modern electricity network. Australia has been alow cost energy producer which was our major comparative advantage. This is now at risk because Governments have failed to grasp what is at stake and have continued to apply band aid solutions to prop up a broken regulatory framework, ” Mr Chesson said.

The table below provides a summary by local govrernment area (LGA) and industry type of the customers whose traffi will be changed for your information.

Tables provide by Essential Energy showing the number of businesses currently on an incorrect network tariff the vast majority of which could see their electricity bills double because of mistakes made by the NSW Government owned Essential Energy. 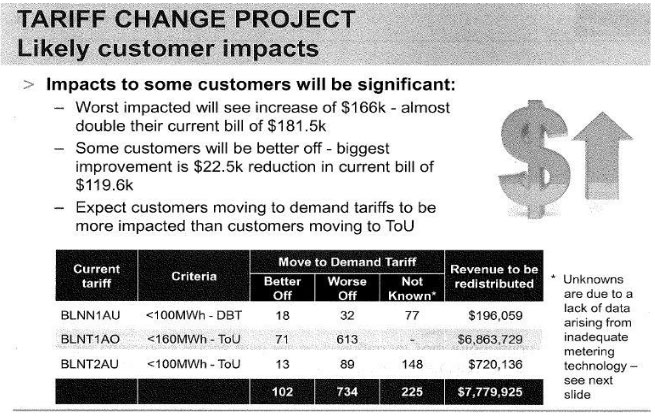