Steve Whan said “it is always difficult to see large fish kill events whether they are from drought, algal events or black water. Unfortunately, in nature they are not always avoidable but we should do our best to minimise their occurrence.

“That’s why the Murray Darling Basin Plan is important. It’s about managing a scarce resource, shifting water from agriculture to the environment and responding to times of drought.

“It is disappointing that some people and organisations seek to use devastating drought and the sort of fish kill event we have unfortunately seen on the Darling River to push their own agenda.

“In a rational discussion about causes of the current event the following things need to be noted:

“Some of the headline seekers are trying to blame irrigation farmers for the current problems. The fact is, in a variable climate growing annual crops like cotton and rice is sensible. In a drought these crops are often not planted – thus this year production of both these crops will be very low.

“Nutrient levels in the rivers also promote algal blooms and that is why our irrigation farmers have worked hard over the last few decades to collect run-off from cropping areas to ensure fertilisers don’t go back into the rivers.

“Management of the Menindee Lakes is a legitimate area for discussion. Many people were concerned about the rapid release of water from the lakes – but it needs to be clear that release was not for irrigators, it was to meet the Basin Plan commitments including flows through the Murray mouth.

“Over the past couple of years far more water has gone from the Menindee Lakes from evaporation than has been extracted by irrigators on unregulated rivers. That’s why it is important to have a sensible and rational discussion about whether reconfiguration of the man-made storage at Menindee Lakes could save evaporation and improve reliability of lower Darling flows.

“Finally, it is important to remember that Northern Basin dams, on regulated rivers, play a vital role if the drought continues, to assist critical human need to be met along with sustaining some river life and, as far as possible, permanent plantings.

“I noted on a recent trip to the Moree area that even in drought these storages had enabled environmental water managers to undertake some wetland watering.

“It would be a very stupid decision to break water sharing rules and release remaining water from upstream storages – in the forlorn hope it might make it through a dry system to Menindee. Authorities must plan for the possibility that this drought might continue.

“No one wants to see the sort of fish kills and very poor water quality that we are seeing in Menindee and in other areas along the river system, but ill-informed scapegoating of irrigators will do nothing to help avoid it in future.” 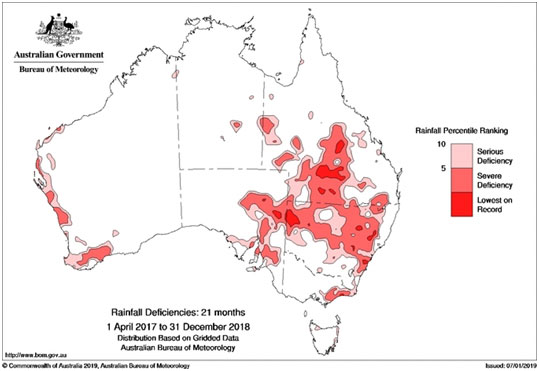