Our energy network owners must be living in a parallel universe if they think Australia’s job generating agricultural sector should be pleased to be paying unjustified profits says National Irrigators’ Council CEO, Steve Whan.

“In response Energy Networks Australia didn’t bother to deny the profit, instead they stretched the credulity of any Australian energy user by claiming on twitter that ‘higher profits = lower power bills for customers’.

“In the interesting logic behind this they try to claim that these excessive profits are the result of ‘efficiencies’ and that these profits will be handed back to customers in future price determinations.

“I for one feel that these companies are telling us not to worry about the jobs being lost or our export markets disappearing as we become less competitive – don’t worry about a thing because eventually they will give us some of the money back!

“As I see it the networks are being disingenuous, we are quite happy for them to make reasonable profits and be efficient operators.

“Let’s be clear we have no problem with incentive regulation and we are not calling for a rate of return regulation. What this study found is that networks as a group are making super-normal profits because in the real world they are low risk and consequently have low financing costs, not because they are outperforming.

“We are not the ones advocating a mandatory Rate of Return – particularly not if it builds in excessive returns.  What we want is a Rate of Return guideline that takes into account real world profits and international comparisons.

“Over the past week I have met three irrigators who have disconnected from the grid and gone instead to diesel generators and pumps.

“When farmers shift from grid power to imported fossil fuels, it is a sign of failed policy and it is happening every day.

“It is time that even the energy networks acknowledged that failure and realised that they need to price their services to keep customers not drive them away.” 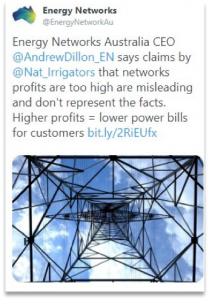