Who grows your fresh food?

Locally grown, fresh and brought to you by an Australian irrigator – that’s the story of most fresh vegetables, fruit and nuts in your local market says National Irrigators’ Council CEO, Steve Whan.

“In fact” says Steve Whan “more than 84% of Australian vegetables (by $ value) are grown by irrigators, 84% of fruit and nuts and more than 90% of grapes. 100% of our rice comes from irrigators and more than half our sugar.

“Almost every one of us loves the feel of wearing cotton or slipping between some cotton sheets – 90% of the cotton grown in Australia comes from an irrigator.

“It’s a picture that confirms the vital contribution Australia’s irrigators make for every Australian’s health and wellbeing. Let alone for the Australian economy where the value of production in 2016-17 was more than $15.5 billion – with more than $7.1 billion of that generated in the Murray Darling Basin.”

The figures are contained in 2016-17’s Australian Bureau of Statistics ‘gross value of irrigated agricultural production’.

Steve Whan said “many Australians now like to think about where their food is coming from, the provenance and the food miles. They can be confident when they think about Australia’s irrigators. Healthy reliable product grown by people who are among the world’s most efficient when it comes to using precious water resources.

“With the eastern states facing a serious drought we can expect some of these production figures to drop temporarily, but drought also highlights the importance of having water stored to irrigate vital crops in dry years.

“The simple fact is that without irrigation we would not be able to supply these vital healthy products that we all enjoy.

“Without Murray Darling irrigation,specifically, we would be importing – not exporting – wine and rice, almonds, oranges and many other great products” 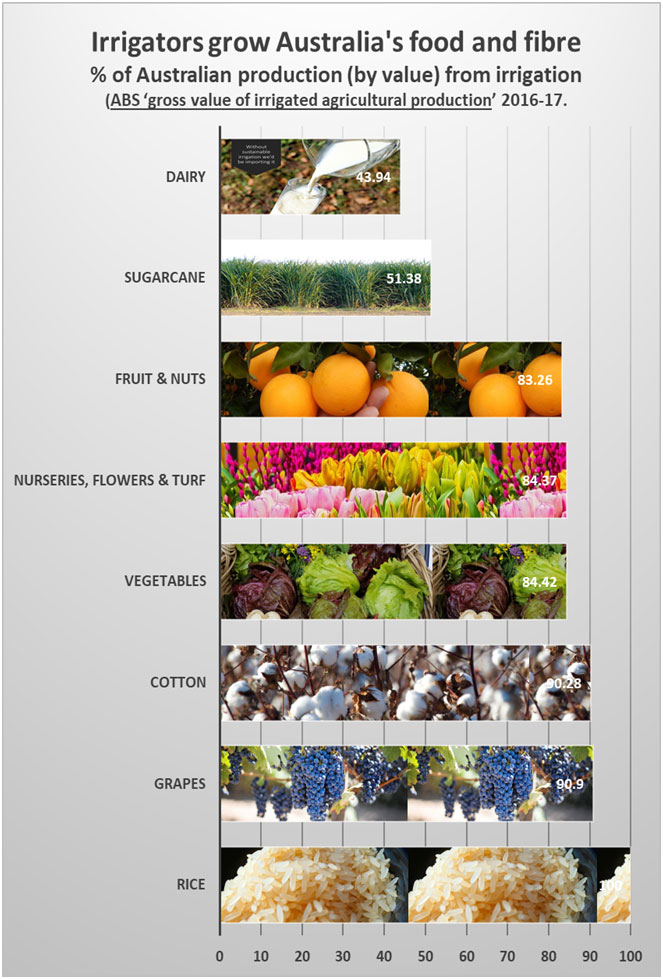