6000 BC
Irrigation practices were first developed in ancient Egypt and Mesopotamia around 6000 BC. When the Nile, Tigris, and Euphrates rivers flooded between July and December, farmers would divert the water into fields to water their crops.

3500 BC
The annual flood season along the ancient Nile river was unpredictable without records, so the Egyptians created a flood gauge called the Nilometer. It featured a vertical column with marked intervals that was submerged into the river to indicate the depth. The Egyptian priesthood would use the Nilometer data to help them predict when the next flood would occur.

3100 BC
It was around 3100 BS when King Menes developed the first major irrigation project during Egypt’s First Dynasty. Dams and canals were used to divert flood waters of the Nile into a new lake called lake “Moeris.” 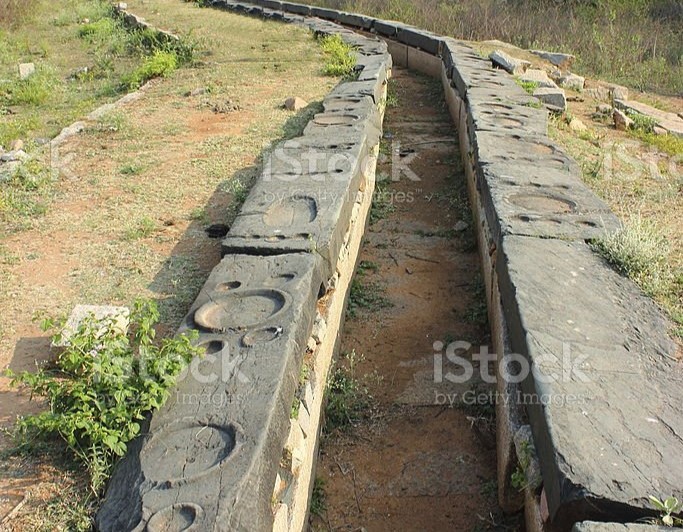 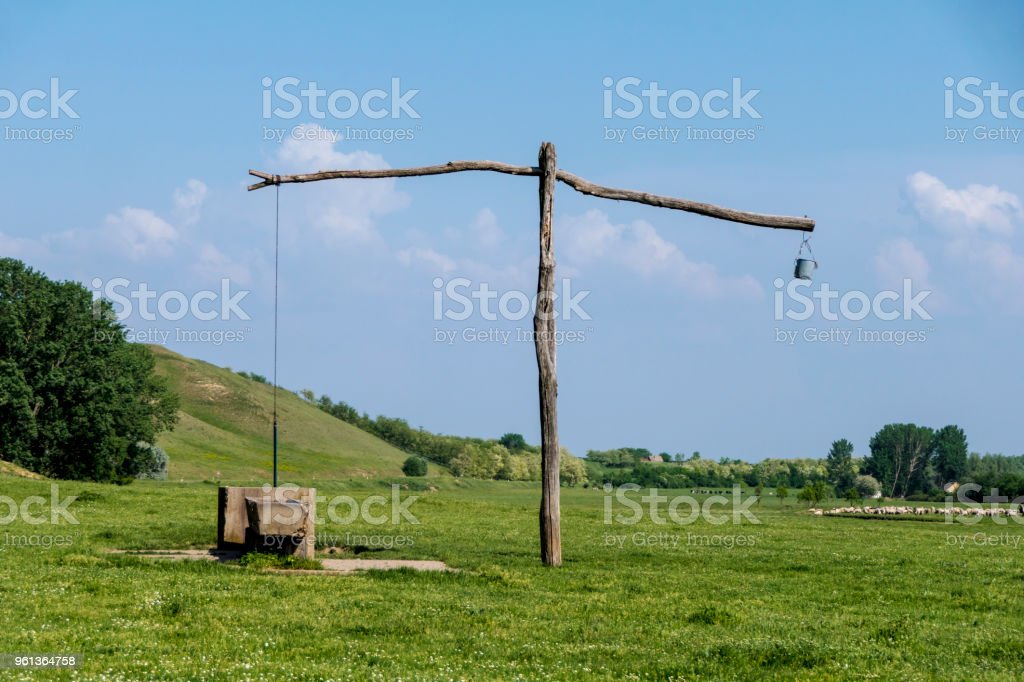 1792-1750 BC
Water regulations were first imposed by Babylonian King Hammurabi. The rudimentary code covered things such as a farmer’s responsibilities to maintain the canals on his property, the allocation of water calculated on the farm’s acreage and the overall administration of the canal by all users.

1700 BC
It was around 1700 BC that Shadoofs were invented. A large pole is balanced on a crossbeam where a rope and clay pots, or buckets hangs from one end and a heavy counterweight hangs from the other end. When the rope is pulled the bucket lowers into a canal or river. The counterweight is pushed down to raise the bucket full of water. The pole is then swung around, and the bucket emptied into a field or different canal. Shadoofs enabled irrigation when a river wasn’t flooding which meant higher ground could be used for farming.

700-600 BC
Egyptian Water Wheels were first invented around this time. They comprised a vertical wheel with clay pots attached around the circumference. The wheel was turned by the current of the river and the pots were submerged and filled with water. Then as the wheel rotated around, the filled pots are emptied by gravity into a trough or aqueduct. The empty pots are then resubmerged and refilled. Water wheels provided the ancient world with the first automated lifting device.

550 BC
550-331 BC saw the invention of Qanats, also known as Kareze, in Mesopotamia. The development of Qanats enabled groundwater to become the primary source of crop irrigation in climates where surface water evaporation is an issue. A Qanat comprises a series of well-like vertical shafts that are connected by a gently sloping tunnel that taps into groundwater and delivers it to the surface by gravity, without need for pumping. 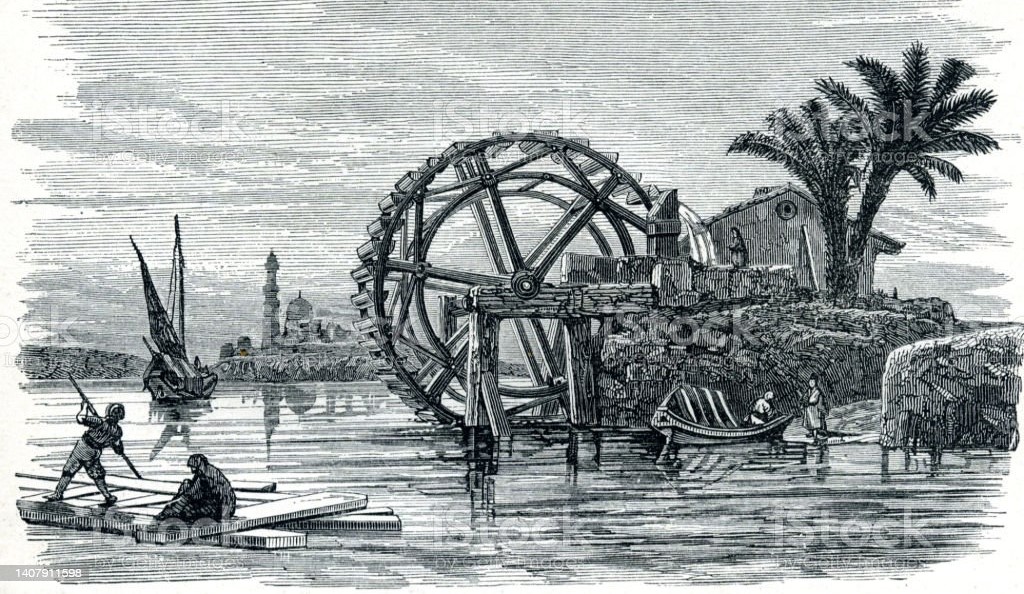 *IMAGE NOT LICENSED* Image: The depiction of a water wheel in ancient Egypt 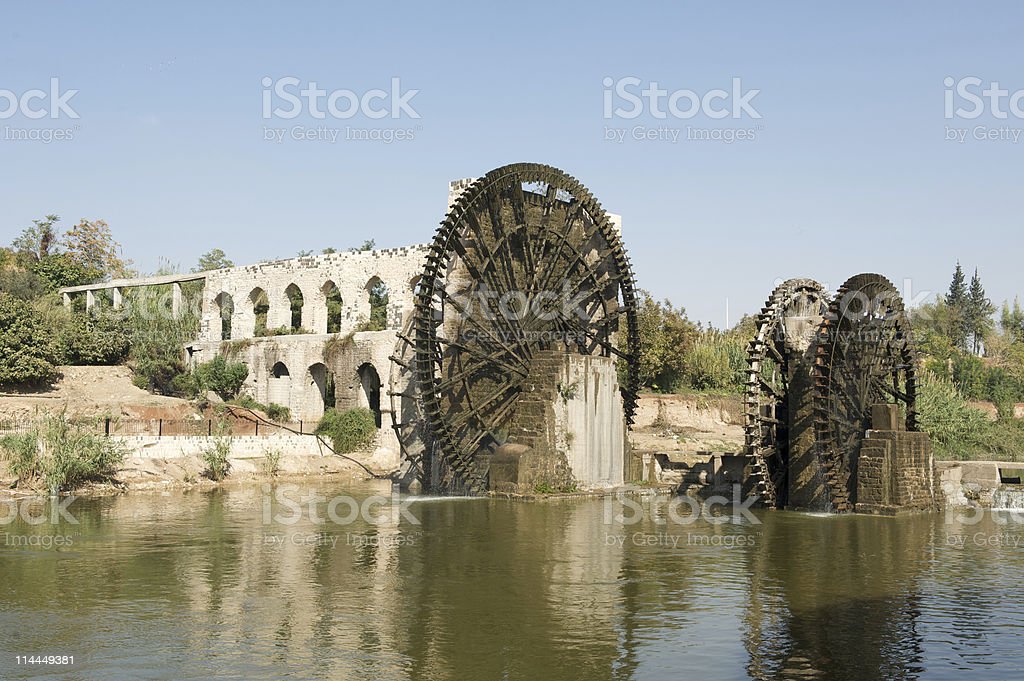 *IMAGE NOT LICENSED* Image: An old noria on the Hama river, Syria

The vertical shafts along the underground channel are for construction and maintenance purposes. The natural slope allows well water to travel by gravity down the tunnel and emerge some distance down slope from the well. Once the tunnel was completed, the area had a constant source of water. Qanats are still in use today and at least 20,000 still operate from China to Morocco.

500 BC
The first pump, called a Sakia, was invented around 500 BC. The device was a series of pots on a rope that ran over two pulleys. A cogged wheel powered by oxen allowed the pots to enter the water supply, fill and then be raised and emptied. The Sakia is similar to the Noria except that it was powered by an external force rather than the flow of the river’s current.

Irrigation is a process of artificially applying water to land for the purpose of agricultural production. Irrigation is integral to food and fibre production in Australia due to our arid conditions.

Level basin irrigation is the closest thing there is to flood irrigation and is typically used on smaller, level fields. The basin is created by completely flattening a piece of land and surrounding it with earth banks to keep the water in place. Water is applied rapidly to the entire basin until a pond forms. The water then soaks into the soil below, hydrating the crops. 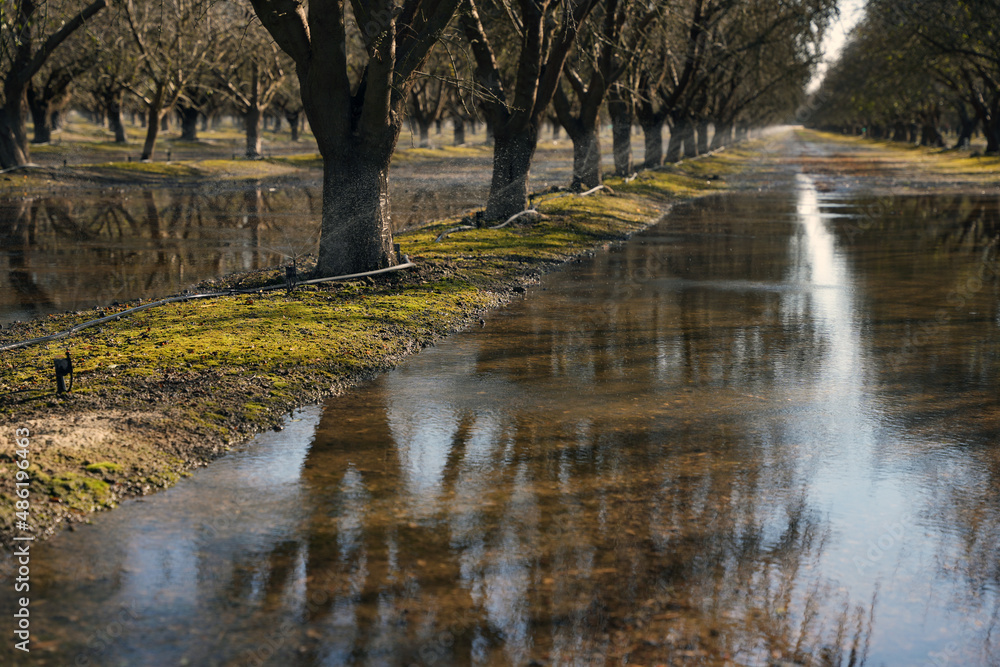 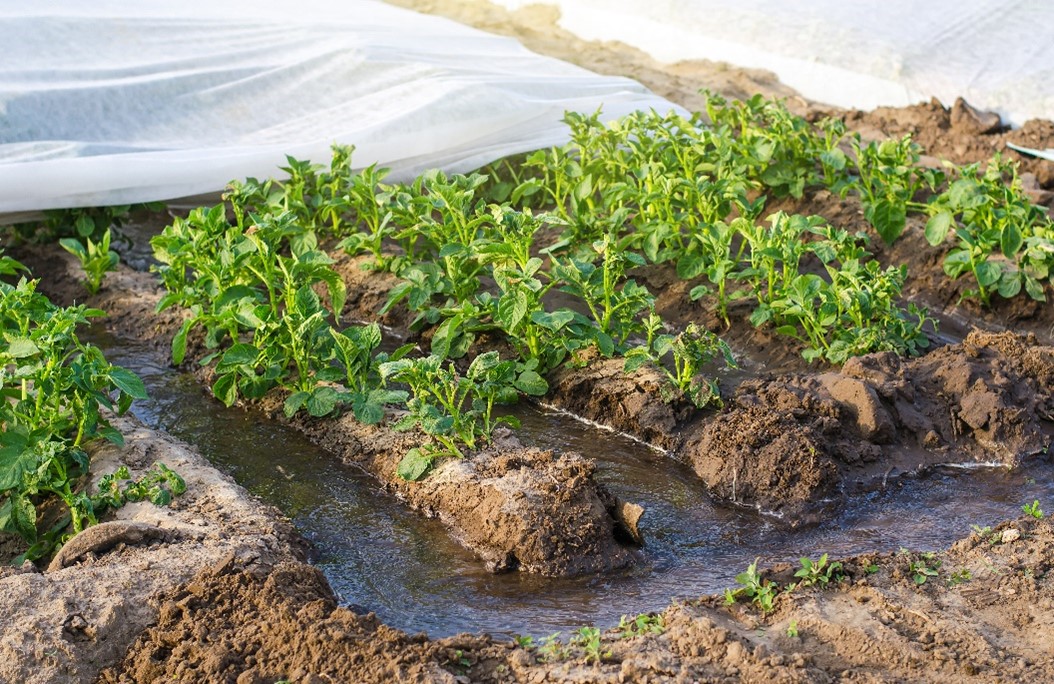 Furrow irrigation uses water channels that utilise gravity to provide water to crops. Ridges and furrows are placed in rows with plants grown in the raised ridges and water flowing through the furrows to irrigate the crops.

Furrow irrigation is best suited to clay, loam and silt soil types. Sandy soils are not well suited to this type of irrigation due to its inability to hold water.

Furrow irrigation is well suited to broadacre row crops such as cotton, corn, and sugar cane. It is also used in some horticultural industries such as citrus, stone fruit, and tomatoes.

Flood irrigation is a system that distributes water via open irrigation channels to bays that have been separated by ridges, or “check banks”. The water travels down the paddock’s slope and is guided by the ridges.

Similar to furrow systems, flood or border check systems can be curved to follow the shape of the land. This type of irrigation is usually best suited to vineyards, orchards, pastures, or grain crops. 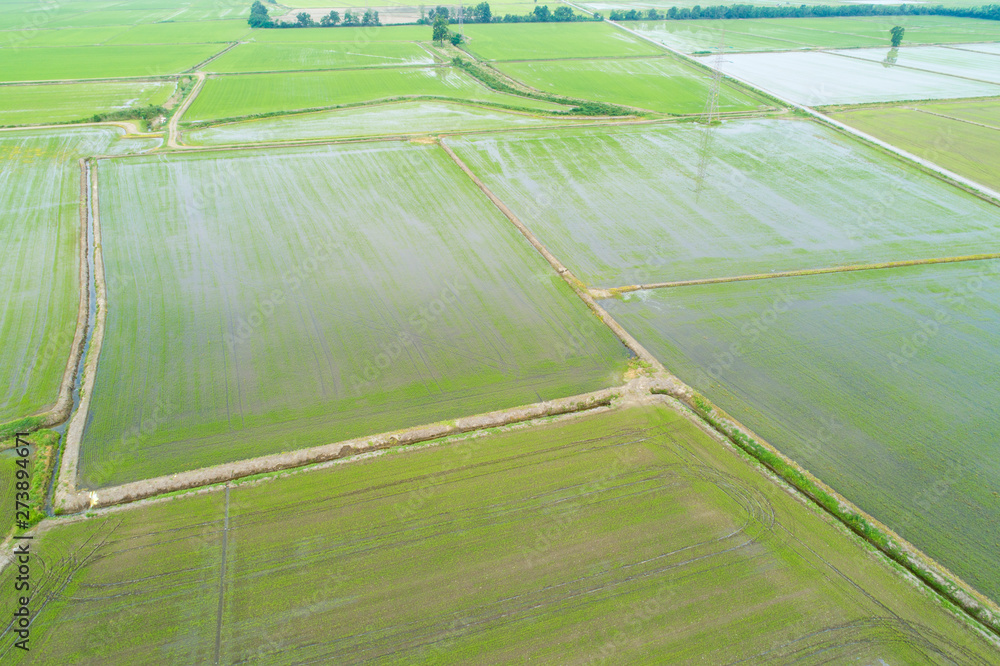 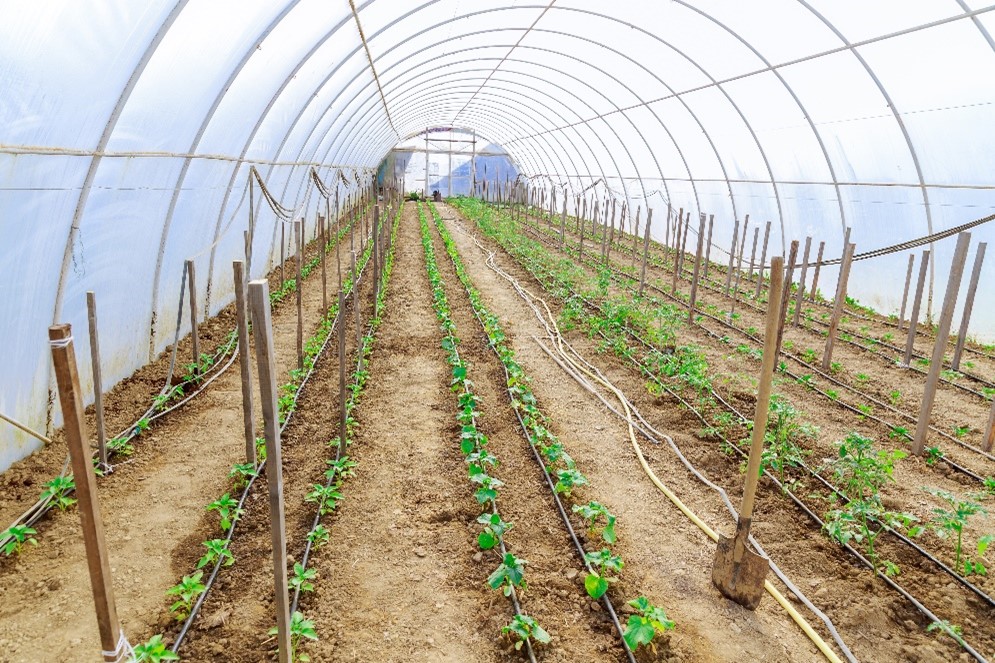 Image: Drip irrigation inside a greenhouse

Drip irrigation is a form of low-flow irrigation that uses small diameter pipes placed either above or below the surface of the soil. The water is slowly delivered at frequent intervals through small holes or emitters in the pipes onto the soil surface, or directly to the root zone.

Drip irrigation systems comprise a network of main, sub-main, and lateral lines that supply water to crops. The slow delivery of water reduces run-off and evaporation.

This type of irrigation is commonly used in orchards and vineyards.

Linear irrigation systems are similar to centre-pivot systems. The main difference is they move in a continuous straight path over a rectangular field. Water can be delivered via a drag hose connected to a hydrant, or via a channel feed system. 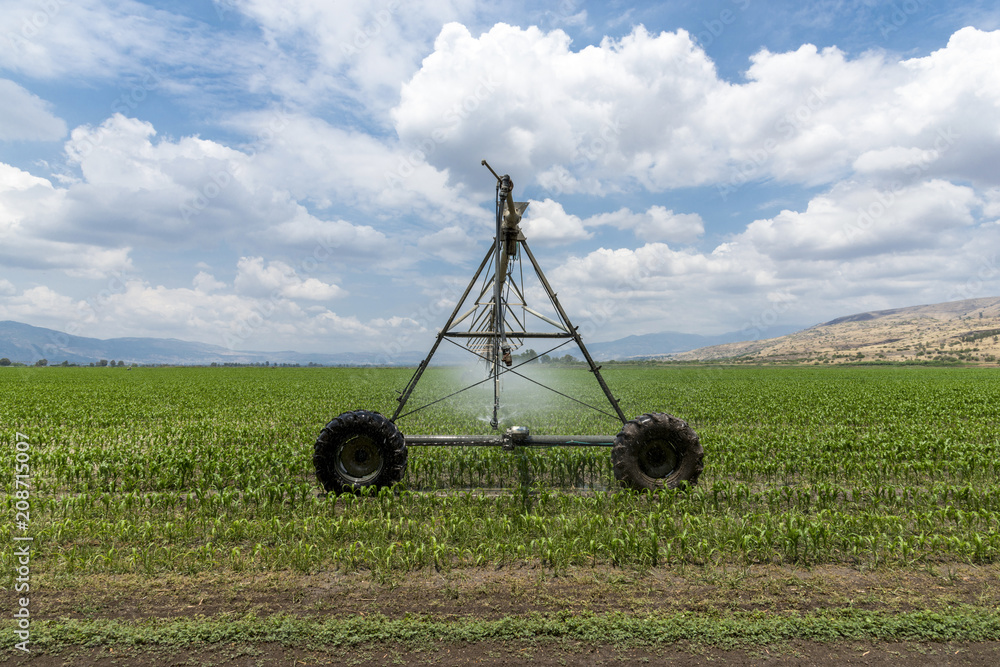 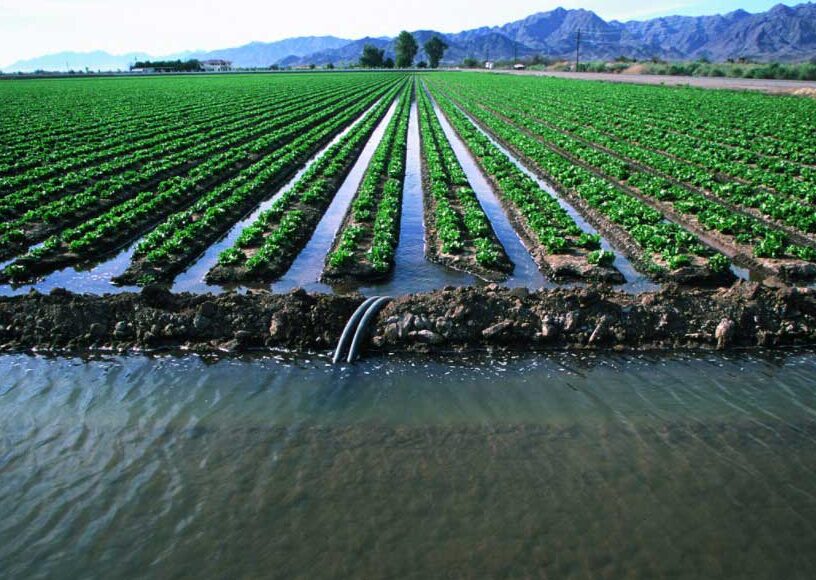 Border irrigation systems are similar to basin irrigation in that both feature a uniform flow of water over the soil. The main difference is that basin irrigation needs level fields and the water may pond in the basin for extended periods. With border irrigation, sloped fields are divided by ridges that create rectangular strips with free drainage at the end.

Centre-pivot sprinklers are self-propelled systems where a single pipeline is supported by a row of mobile towers. The pipeline is usually suspended between 2 to 4 meters above the ground and crops must grow under this height. As the water is pumped through the pipeline, the system rotates around from the centre point and irrigates a large circle area. The water is pumped out with less pressure near the centre of the system with increasingly greater force as it gets closer to the outer edge to ensure an even water coverage without over-watering the centre section. 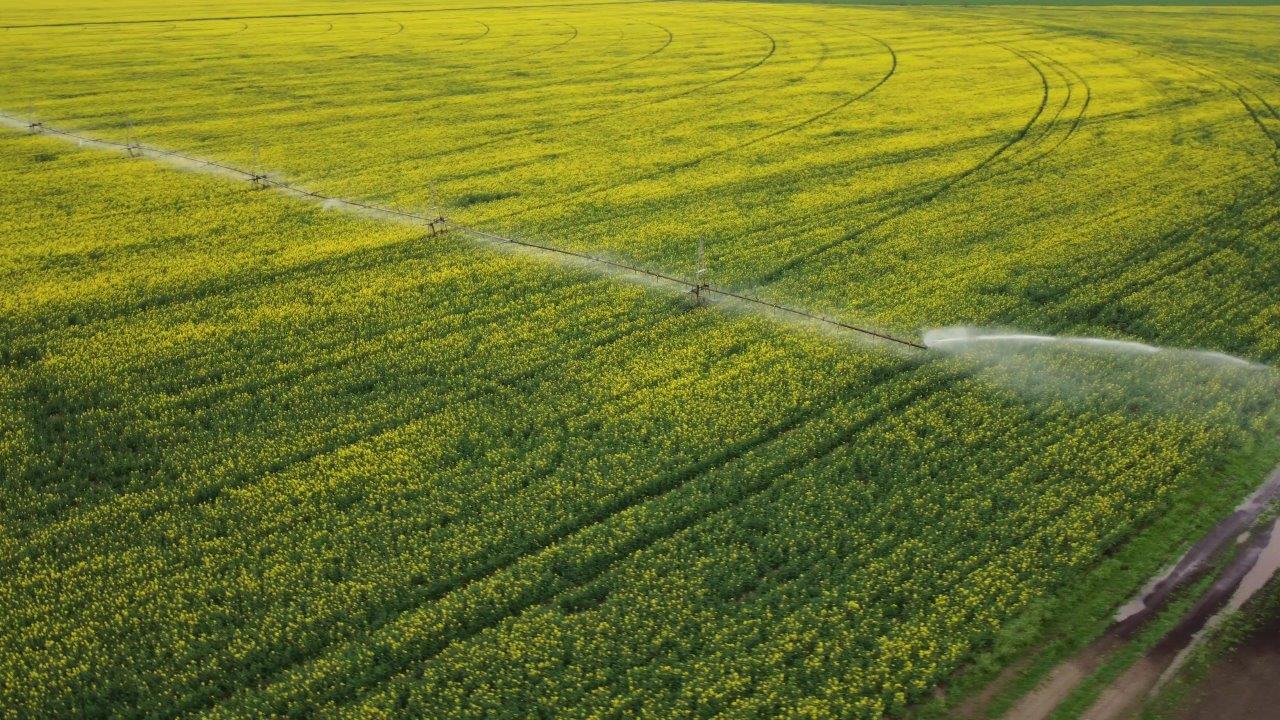 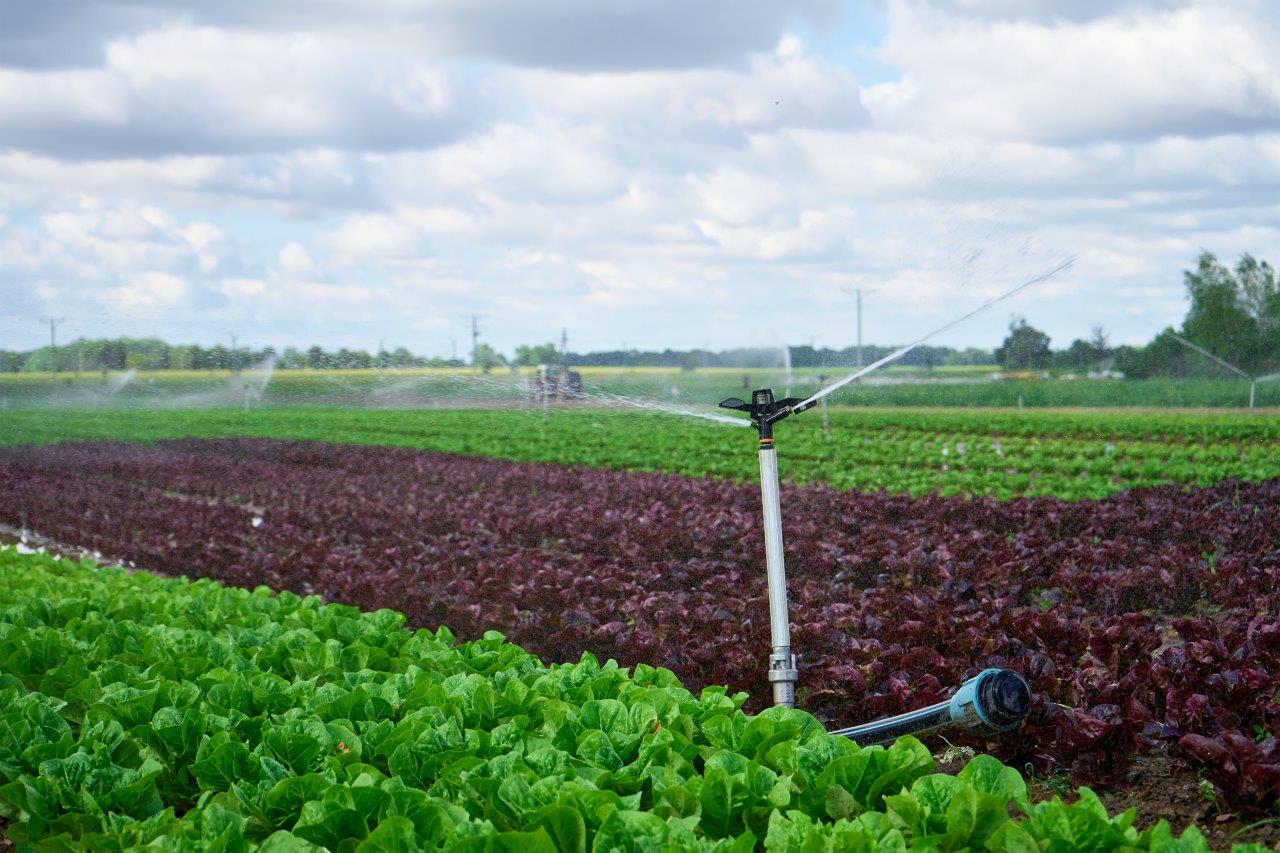 Hand move sprinkler systems comprise lightweight lateral pipelines that are manually moved to provide water to crops. The pipes have sprinklers installed at regular intervals and are mounted on risers so they can operate above the crops. They draw water from a portable or buried mainline water source.

Hand move sprinklers were developed in the mid 1930’s and were the first irrigation technology to supersede centuries old flood irrigation practices. Although this type of sprinkler system has a low initial set-up cost, it does come with higher labour requirements. These sprinklers can be used on most crop types, except for very tall plants due to the difficulty repositioning the pipes close to harvest. Hand move sprinklers are suited to smaller farms and irregular shaped fields.

A solid set and fixed sprinkler system is a form of stationary irrigation where lateral pipelines are permanently fixed beneath the surface of the ground and sprinkler nozzles protrude above the surface to spray water over the crops.

This is a popular type of irrigation for orchards, vineyards, turf farms and landscaping. 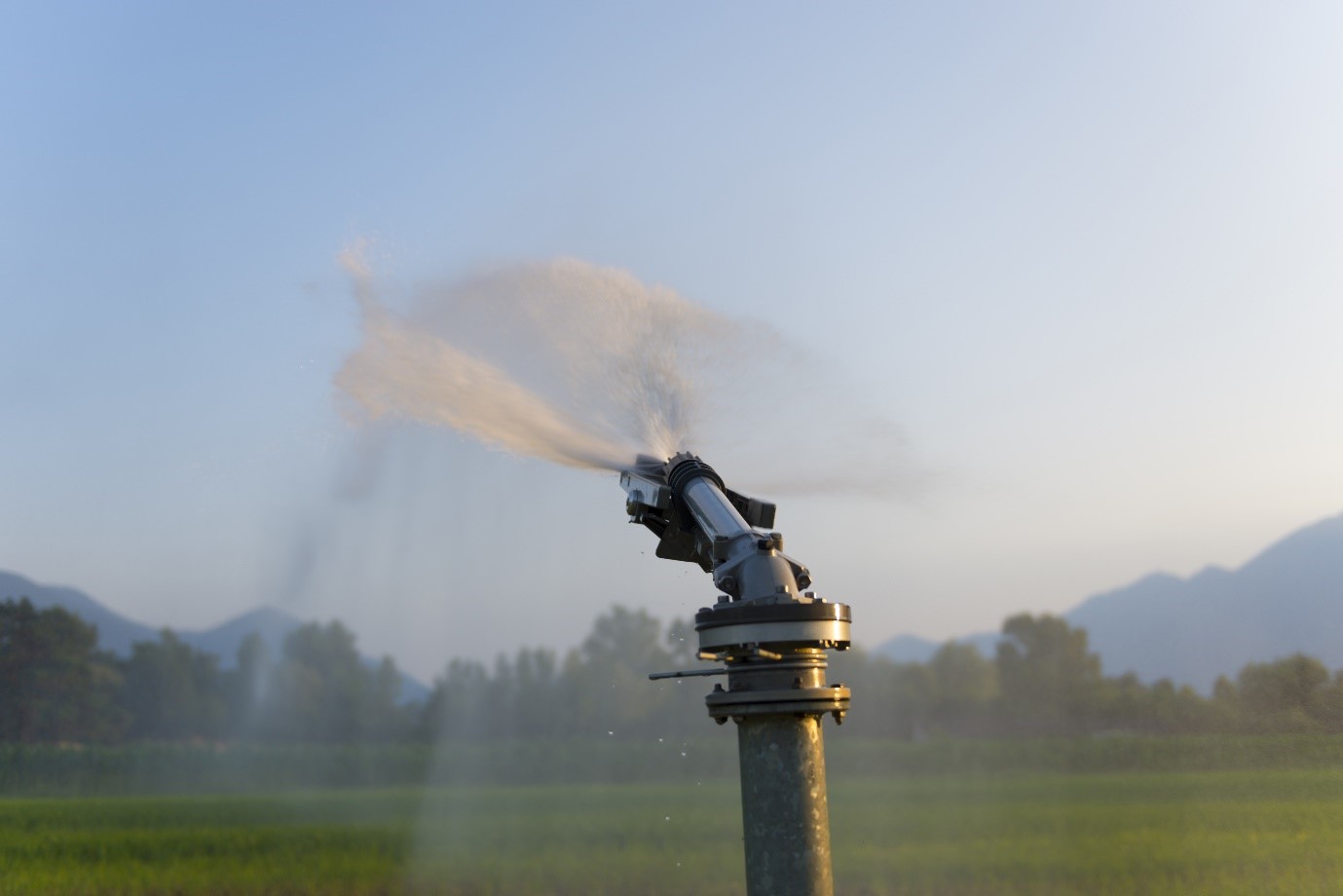 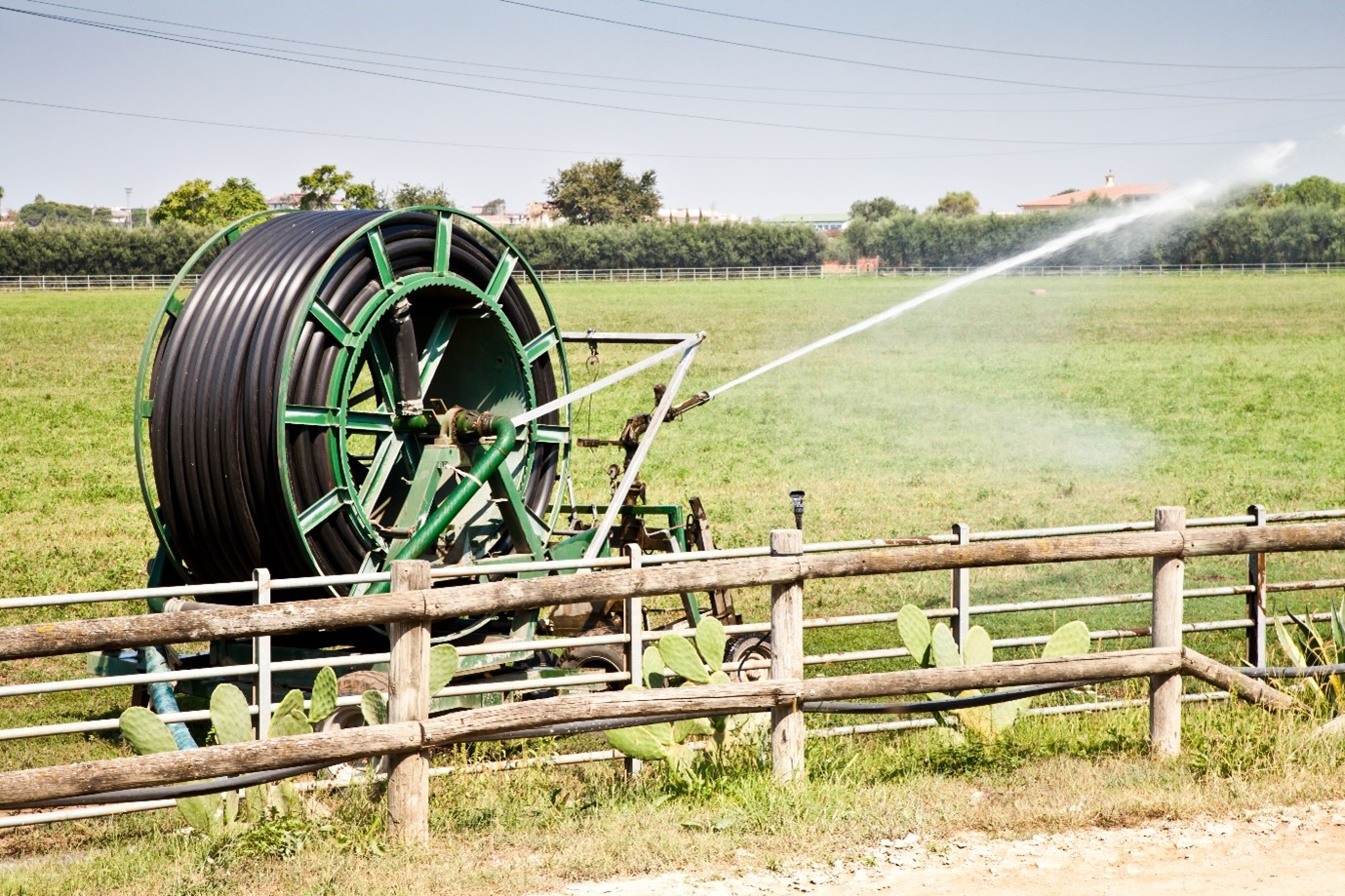 Travelling gun systems use a large high-pressure sprinkler that is mounted on top of a trailer. This self-propelled sprinkler system pumps water through a flexible hose or draws from an open ditch along which the trailer passes. The gun may be operated in a stationary position and manually moved to the next location, but they are mostly used as a continuous move system. These systems can be used on most crops.

Side-roll wheel-move irrigation performs best in rectangular fields with low growing crops. The lateral line is mounted on wheels, with the pipe forming the axle. The wheel needs to be at a height where the axle clears the crop as it moves. The system moves forward with a drive unit that is often powered by an air-cooled petrol engine. This type of system is not recommended for slopes greater than 5%. 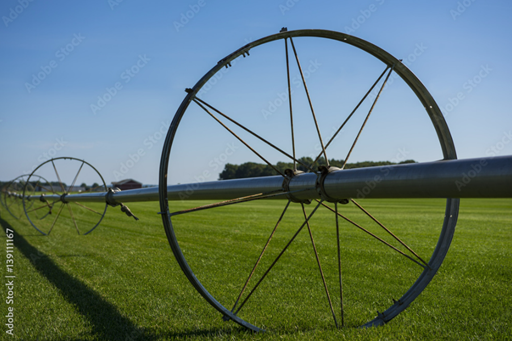 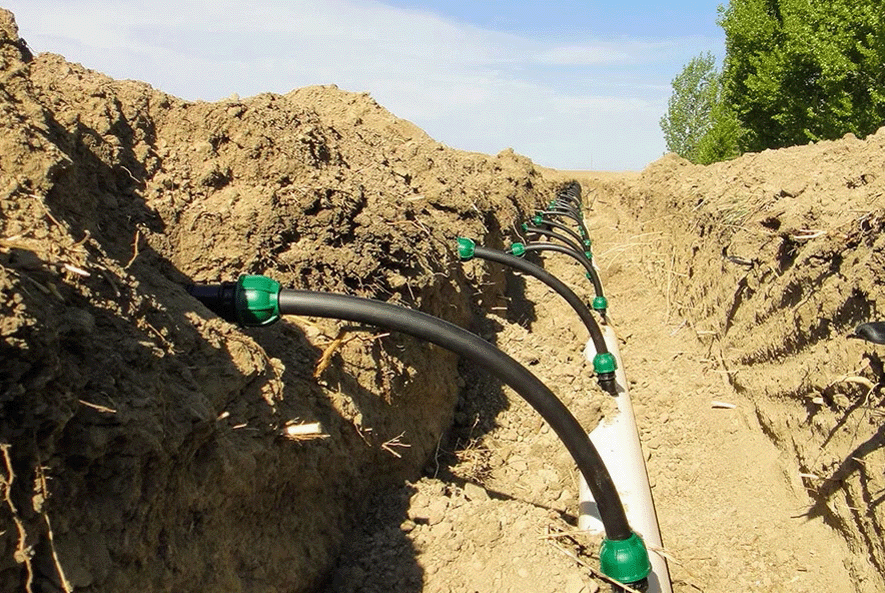 Subsurface irrigation, also called sub irrigation, applies water to crops from beneath the surface of the ground either by constructing trenches or installing underground perforated pipelines. As water is passed under pressure in these pipes, it comes out through open joints which reduces evaporation losses.