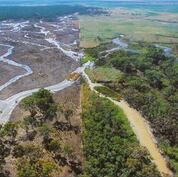 Skin in the game:

Picture around 257 hectares of serene, natural bushland in the heart of New South Wales – that’s one square mile, or about the size of 5,873 average house blocks in Australia. So if you’re imagining a few suburbs’ worth of nature reserve, you’re about right.

Now imagine finding the cash to buy that sort of land, without any intention to graze, grow or build on it for commercial purposes – just for the sake of regenerating its natural heritage. If those numbers and rate of return seem a bit too hard to visualise in your bank account, how about grabbing 30 mates to see if they’d like to chip in?

You’d be forgiven for thinking this seems a little far-fetched. But this is the story behind ‘Burrima’, a property that forms part of the Macquarie Marshes, located in northwestern NSW, along the lower Macquarie River about 600 km northwest of Sydney. The Marshes are a jewel in the Murray-Darling Basin system, with about 12% of the wetland forming a protected nature reserve, and the remainder owned privately. 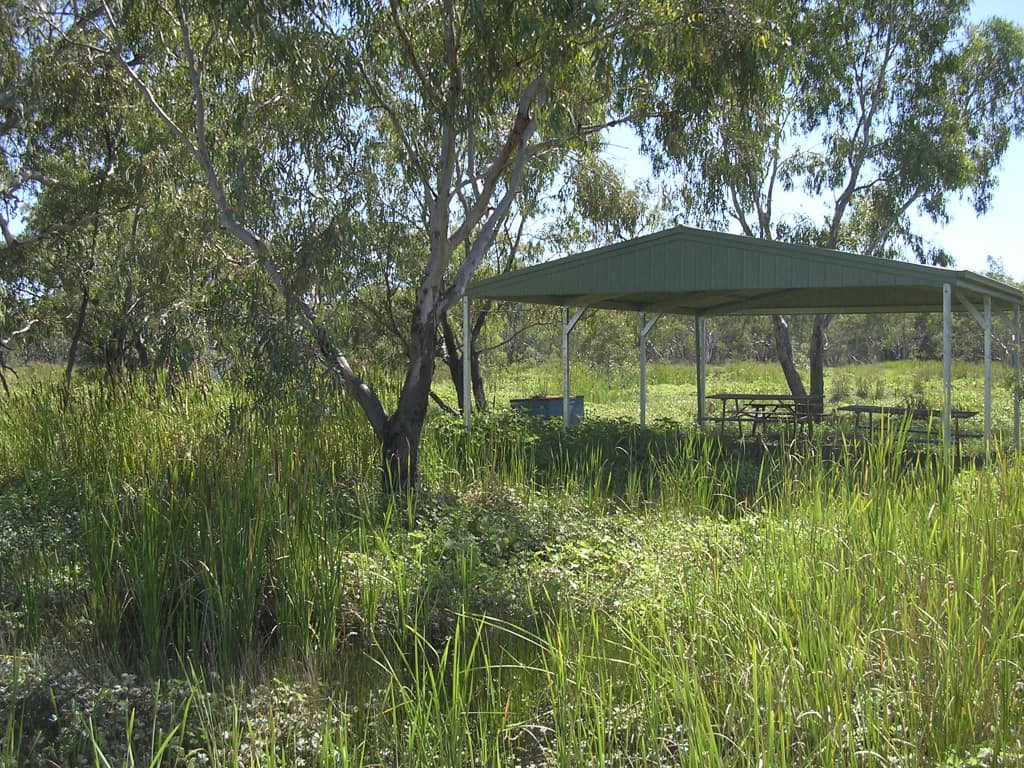 ‘Burrima’ is one such privately owned portion, bordered on three sides by the Macquarie Marshes Nature Reserve. The block exemplifies key types of vegetation found across the internationally significant area, including river red gums, coolibah woodlands and chenopod shrublands. David Duncan, Tony Wass, and Glen Whittaker are part of a syndicate of farmers who took an opportunity to purchase units in the block, and in doing so, the group of 30 water users, citizens and businesses entered the realm of dedicated advocates for the natural environment.

“We were frustrated at lack of access to public land in the marshes, and we were told information about the marshes that was debatable. After being shut out of the debate we decided that instead of being branded as being part of the problem, we had to do something about fixing the problem,” said Tony

“‘Burrima’ is a window into the wetlands,” said David, “and an opportunity to have a voice in environmental management.”

Looking back at images taken when ‘Burrima’ was purchased in 2005, and comparing them to images and notes from just three years later, the difference is astounding. Parts of the block had been scalded due to overgrazing, resulting in decreased topsoil integrity and degradation of the natural reed beds. The group’s regeneration approach informed their decision to rest the severely overgrazed property, install exclusion fencing to control total grazing pressure by excluding wildlife and the feral animal population, utilise waterponding techniques, and plant saltbush to help hold water on the higher areas.

The results of the strategy aren’t just anecdotal. There has been a documented reduction in turbidity (particles causing ‘cloudiness’ in water) in the Macquarie River, which flows through ‘Burrima’. The farmers have also seen increased water efficiency through the use of more effective management strategies during eWatering and rainfall events, with Glen adding, “Ponding banks and saltbush retain rainfall and maintain vegetation cover.”

These efforts have resulted the recovery of the largest reed bed in the southern Australia, as well as native wildlife, providing localised reprieve during times of drought. “The results were much more dramatic than any of us expected,” said Tony, “The debate said simply ‘add more water’, but what we’ve demonstrated is you can actually get a multiple increase in beneficial use of eWatering if you manage the land appropriately, through measures such as controlled stocking and feral animal control.” 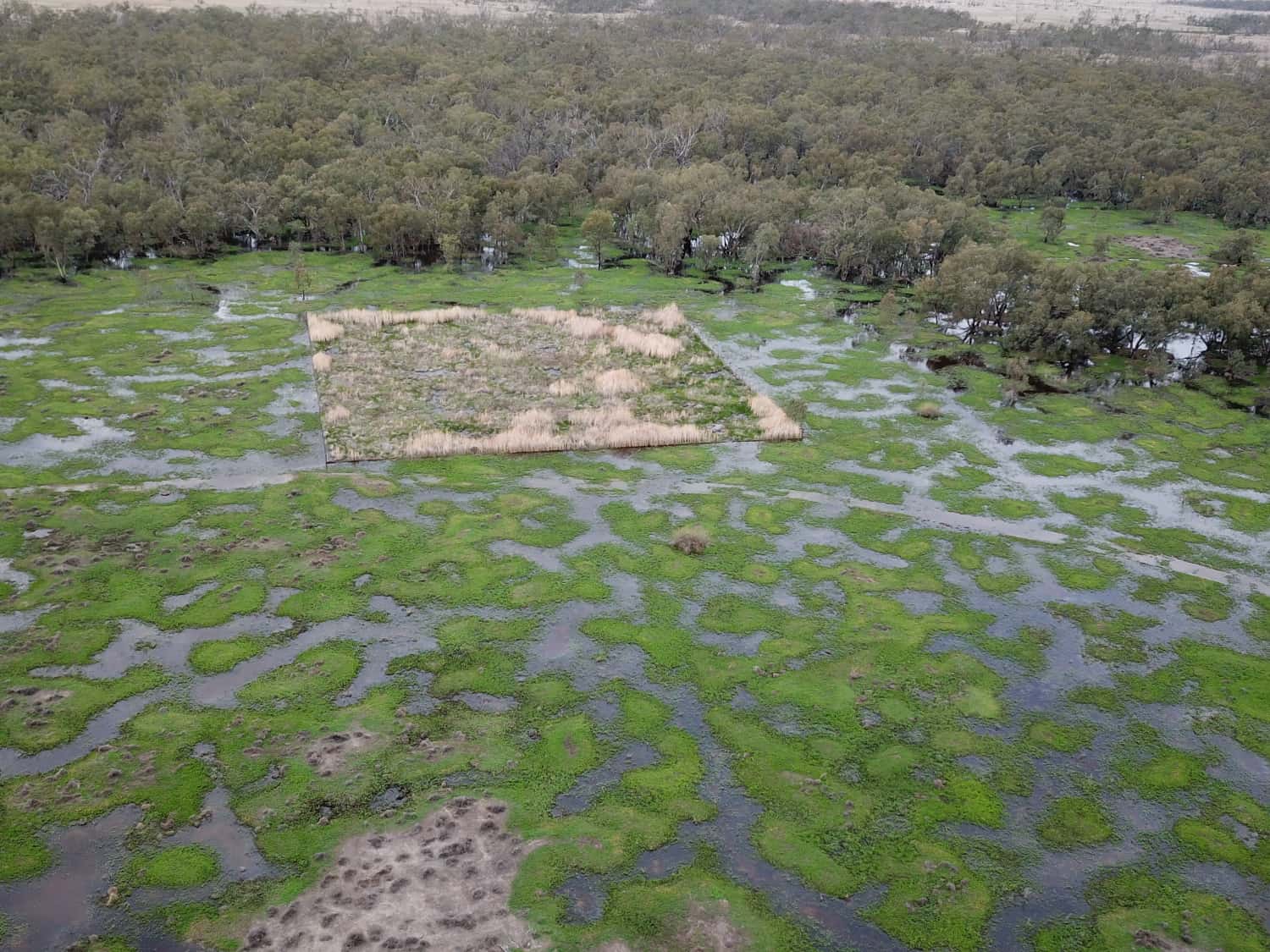 Exclusion Fencing around one demonstration plot at the height of an eWatering event in October 2018: shows the effect of a distinct boundary between the area excluded from total grazing pressure where vegetation recovery is extensive, and the area accessible by kangaroos and wild pigs. 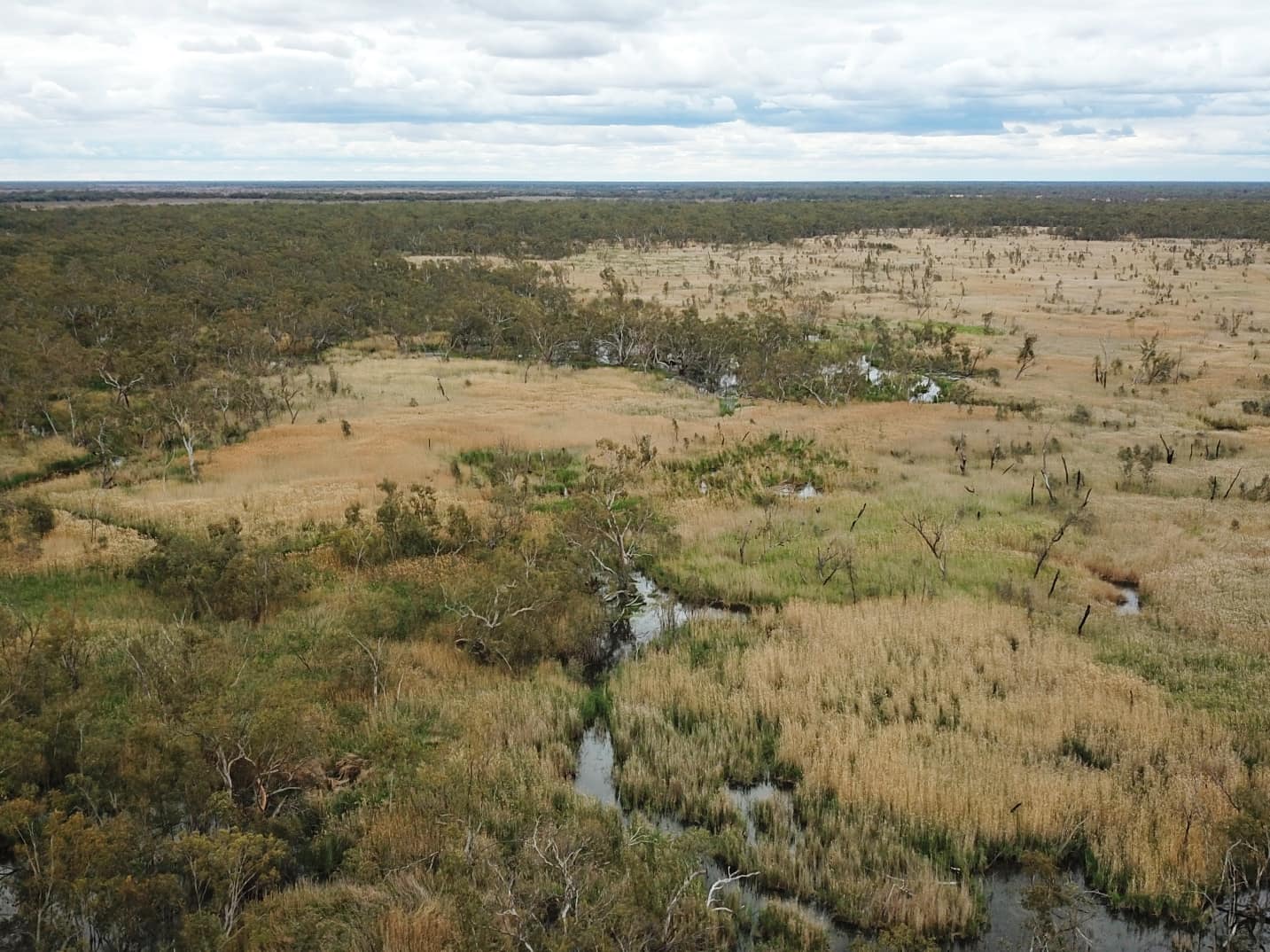 As an education and demonstration block, ‘Burrima’ has welcomed many visitors who are keen to get a balanced view on water use in the region. These efforts have been complemented by the work of the Destination Macquarie Marshes Task Force, who have just been awarded a $3.4 million grant from the Regional Growth Environment and Tourism Fund. Some of the funds will be used for construction of an elevated section of boardwalk over ‘Burrima’, which will enable even greater access by the general public to witness the work of water users to promote balance and sustainability across all farming practices. “It’s a project that we’re really excited about. When completed it will give all people better access to the Marshes,” said Glen.

The enthusiasm for the future is echoed throughout the group and among the local community, with David adding “We have been doing tours for visiting politicians, schools, bird watching, and the like – but this will open up access to a range of people, right back through to the North Marsh reed bed. Our back fence overlooks the largest reed bed in southern hemisphere!”

The group is also keen to acknowledge the part of the community getting behind the vision of ‘Burrima’. Glen explained the broadwalk has had a huge response and commitment of around $350,000 worth of ‘in-kind’ work from local farmers, businesses, and volunteers in the community.

Reflecting on the journey so far, David has embraced a holistic approach as the key to success. “A big part of the issue is how we manage the land. Water is the catalyst…but unless you change the management of the land then you’re not going to change the condition of the marshes.”

“In the broader picture there’s still an obsession with water without any sort of water or land management. There’s other factors at play – rather than just the volume of water,” Glen reiterated.

These sentiments are shared throughout ‘Burrima’ landowners. They feel the debate over water management had left some farmers without a voice to defend themselves against the blaming over water use. They said ‘Burrima’ has demonstrated that a balanced approach is central to making a meaningful contribution to a way forward. It’s also reinforced the responsibility of the general public to be aware of the complexities and the need for balance across all farming industries when it comes to management, as opposed to an oversimplified view of water use.

“Everybody’s an environmentalist at heart,” concludes David, “We want to leave the land in a state better than we found it – and this is our opportunity to have a crack at that.”

NIC is the national peak body for irrigators in Australia, representing member organisations across irrigation regions, States and major agricultural commodity groups. Our aim is to ensure the efficiency, viability and sustainability of Australian irrigated agriculture and the security and reliability of water entitlements.

Acknowledgement of Country: In the spirit of reconciliation, the National Irrigators' Council acknowledges the Traditional Custodians of country throughout Australia and their connections to land, sea and community. We pay our respect to their Elders past and present and extend that respect to all Aboriginal and Torres Strait Islander peoples today.